Today I got fed up with typing Esperanto using the x-method, the practice of following letters that would be accented with an X since the accented characters aren't on the typical keyboard. For example, the word "ankaŭ" would be typed as "ankaux." This is the 21st century, though, and there had to be some easy way enter properly-accented characters!

Believe it or not, there is an Esperanto keymap, but I didn't feel like going that extreme since it would make entering other characters that I type on a day-to-day basis more difficult.

Instead I tracked down how to augment my English (US) keymap with the extra functionality I needed, and it was easier than I had expected it to be. So if you want to set up your keyboard to type Esperanto accented characters, here's the steps. 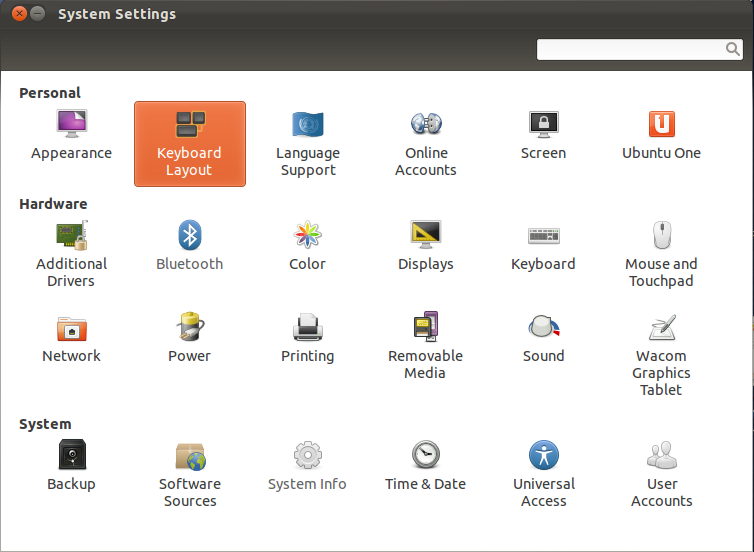 Then, select the keymap you want to modify (here there's only one) and click the Options button in the bottom-right corner of the screen. 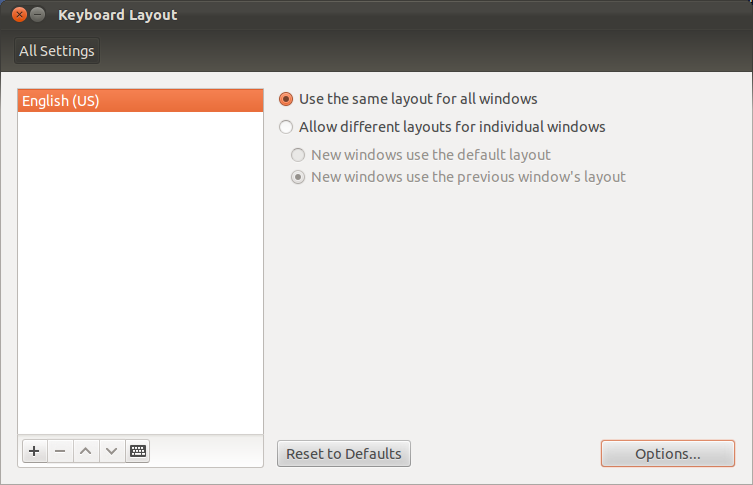 The Keyboard Layout Options window that opens has a list of options that you can use to fine-tune the behavior of the keymap. The two options of interest are:

Each key can be thought of having multiple levels. For example, the first level of the C key would be a lower-case "c". The second level would an upper-case "C" (the second level is accessible the Shift key as a modifier). The supersigno option maps the accented characters to the third and fourth levels of the keys of their respective base glyphs. That is, the third level of the C key is now "ĉ” and the fourth is "Ĉ".

I want to give a great big shout out to Maxx Solomon in whose blog I found the original directions. His method was much easier to follow and configure then all the stale X.Org setting tutorials I found from the late 90's. I figured I'd do my own write up as well to increase the changes of others finding it when they search, and because I was feeling guilty about not writing anything in a couple months in my blog. :) Feel free to stop over to his blog and say hi; I'm sure he wouldn't mind the extra traffic.

Popular posts from this blog

July 13, 2010
I'm not quite sure exactly I was searching for, but somehow I serendipitously stumbled upon the site learnprolognow.org a few months ago. It's the home for an introductory Prolog programming course. Logic programming offers an interesting way to think about your problems; I've been doing so much procedural and object-oriented programming in the past decade that it really took effort to think at a higher level! I found the most interesting features to be definite clause grammars (DCG), and unification. Difference lists are very powerful and Prolog's DCG syntax makes it easy to work with them. Specifying a grammar such as: s(s(NP,VP)) --> np(NP,X,Y,subject), vp(VP,X,Y). np(np(DET,NBAR,PP),X,Y,_) --> det(DET,X), nbar(NBAR,X,Y), pp(PP). np(np(DET,NBAR),X,Y,_) --> det(DET,X), nbar(NBAR,X,Y). np(np(PRO),X,Y,Z) --> pro(PRO,X,Y,Z). vp(vp(V),X,Y) --> v(V,X,Y). vp(vp(V,NP),X,Y) --> v(V,X,Y), np(NP,_,_,object). nbar(nbar(JP),X,3) --> jp(JP,X). pp(pp(PREP,N
23 comments
Read more

May 27, 2013
I’m not an expert on probability theory, artificial intelligence, and machine learning. And even my Music 201 class from years ago has been long forgotten. But if you’ll indulge me for the next 10 minutes, I think you’ll find that even just a little knowledge can yield impressive results if creatively woven together. I’d like to share with you how to teach PHP to compose music. Here’s an example: You’re looking at a melody generated by PHP. It’s not the most memorable, but it’s not unpleasant either. And surprisingly, the code to generate such sequences is rather brief. So what’s going on? The script calculates a probability map of melodic intervals and applies a Markov process to generate a new sequence. In friendlier terms, musical data is analyzed by a script to learn which intervals make up pleasing melodies. It then creates a new composition by selecting pitches based on the possibilities it’s observed. . Standing on Shoulders Composition doesn’t happen in a vacuum. Bach wa
7 comments
Read more

June 11, 2009
Proponents of Object Oriented Programming feel the paradigm yields code that is better organized, easier to understand and maintain, and reusable. They view procedural programming code as unwieldy spaghetti and embrace OO-centric design patterns as the "right way" to do things. They argue objects are easier to grasp because they model how we view the world. If the popularity of languages like Java and C# is any indication, they may be right. But after almost 20 years of OOP in the mainstream, there's still a large portion of programmers who resist it. If objects truly model the way people think of things in the real world, then why do people have a hard time understanding and working in OOP? I suspect the problem might be the focus on objects instead of actions. If I may quote from Steve Yegge's Execution in the Kingdom of Nouns : Verbs in Javaland are responsible for all the work, but as they are held in contempt by all, no Verb is ever permitted to wander about
9 comments
Read more