I’m not an expert on probability theory, artificial intelligence, and machine learning. And even my Music 201 class from years ago has been long forgotten. But if you’ll indulge me for the next 10 minutes, I think you’ll find that even just a little knowledge can yield impressive results if creatively woven together. I’d like to share with you how to teach PHP to compose music.

You’re looking at a melody generated by PHP. It’s not the most memorable, but it’s not unpleasant either. And surprisingly, the code to generate such sequences is rather brief.

So what’s going on? The script calculates a probability map of melodic intervals and applies a Markov process to generate a new sequence. In friendlier terms, musical data is analyzed by a script to learn which intervals make up pleasing melodies. It then creates a new composition by selecting pitches based on the possibilities it’s observed. .

Composition doesn’t happen in a vacuum. Bach was fond of Buxtehude and Vivaldi; Chopin influenced Lizt and Wagner; Mozart and Hayden taught Beethoven. The same melodic phrases are found in different pieces of work. For example, Orfeo ed Euridice by Gluck and the hymn tune Non Dignus both share a common phrase.

But if you ask PHP to compose blindly, the results aren’t pretty. Here's a melody generated by mapping random values returned by successive calls to rand() to notes on a staff.

Unless you’re keen on twelve-tone, it's better to draw inspiration from earlier compositions.

I transcribed the melody of several pieces of music using Scientific Pitch Notation. I didn't concern myself with note duration. Rather, I focused on the notes themselves. A middle C on paper was entered as C4 (C is the note name and 4 is its octave), a semitone above that was C#4, the next semitone D4, and so on until a melody (the first 8 measures of Tantum Ergo by Bottazzo shown here) was encoded:

With an easily parsable sequence, we can now perform some basic analysis. For example, given any instance of A4, what is the next probable note to follow?

This process translates warm flowing music into something the computer, understanding things only within the context of cold, unfeeling mathematics, can reason about.

You're probably familiar with deterministic systems—systems where the same input will always generate the same output. Addition is a deterministic function, with inputs 2 and 4 always yielding 6. Stochastic systems on the other hand behave with some level of randomness. Identical inputs can result in wildly different outputs, such as the function array_rand(). There is an element of randomness in composition, or else all compositions starting on F4 would end up the same, making generations of composers irrelevant and filling the coffers of the RIAA. But the randomness is tempered, even if at a subconscious level, by the composer with the knowledge of what combinations are pleasing.

A prime example of a stochastic system, one which is also relevant to the composition script, is a Markov process (named after the mathematician Andrey Markov who not only studied them but also had an amazing beard). As Nick Didkovsky explains:

Markov analysis looks at a sequence of events, and analyzes the tendency of one event to be followed by another. Using this analysis, you can generate a new sequence of random but related events, which will look similar to the original. A Markov process is useful for analyzing dependent random events - that is, events whose likelihood depends on what happened last.

The traditional example used to illustrate the concept is a weather predicting graph. Suppose the day following a sunny day has a 90% chance of also being sunny and the one following a rainy day has a 50% chance of being rainy. The graph looks like this:

Hopefully it's obvious where I'm going with all of this; it's possible to constrain the random process of "next note selection" using the weighted probabilities learned by analyzing melodies for a better sounding result. This process allows us to generate passable melodies in infinitely less time than it would take for a monkey hitting random keys on an organ to play the complete works of Messiaen. 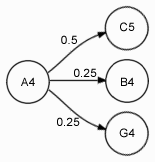 Robot Composers (the singularity is near)

At this point you hopefully have a cursory understanding of the key concepts. Even if you don't, you've survived long enough and will now be rewarded with some code.

The learning process takes place in the train() method which accepts an array of training notes (the encoded melody string split on spaces). The code is simple, quick, and dirty; the notes are pushed to a 2-dimensional array with their probabilities indirectly implied by the quantity of elements themselves. When populated, the array looks similar to:

Looking at the data, a randomly selected note to follow A4 has approximately a 31% chance of being C5 since 4 out of the 13 members of the list hold that value. Maintaining a list like this can be memory-exhausting for large sets, and there are better ways to perform weighted selection. You can find an excellent write up (using Python) at electricmonk.nl.

The compose() method encapsulates the logic to generate the melodic sequence. A starting note the desired length is given, and the method randomly selects a value for the following note from the array until the desired number of notes has been retrieved.

Of course we humans would rather see the result notated on a staff as opposed to a list of note values, so I created a set of note images to accompany the script. Each image displays a note on the appropriate position on a staff, and the files are named according to the note name. Looping through the melody to emit some IMG elements was an effective rendering method for my needs.

It is impressive that such simple concepts can be used to create a script capable of emulating a composer. Of course, there is infinitely more that can be done to build and improve. Consider this your first exploration into musical intelligence. David Cope, who has been exploring computer composition since 1981, has this to say:

Beyond the obvious changes, such as changing the pitch matrix to maintain probabilities, how would you improve things? Maybe replace this naive approach with a completely different mechanism for analyzing music? Parse input from MIDI files? What would be needed to identify harmonies? How about chord progressions? Note durations? Composer "signatures"? Could your script learn from itself by analyzing and feeding pleasing melodies it produced back into its knowledge base? In what ways could you recombine samples to form new works?

I look forward to hearing about your own experiments in AI-driven composition in the comments below.

Update 6/10/13: I've tossed some code up on GitHub if anyone's interested.

Popular posts from this blog

July 13, 2010
I'm not quite sure exactly I was searching for, but somehow I serendipitously stumbled upon the site learnprolognow.org a few months ago. It's the home for an introductory Prolog programming course. Logic programming offers an interesting way to think about your problems; I've been doing so much procedural and object-oriented programming in the past decade that it really took effort to think at a higher level! I found the most interesting features to be definite clause grammars (DCG), and unification. Difference lists are very powerful and Prolog's DCG syntax makes it easy to work with them. Specifying a grammar such as: s(s(NP,VP)) --> np(NP,X,Y,subject), vp(VP,X,Y). np(np(DET,NBAR,PP),X,Y,_) --> det(DET,X), nbar(NBAR,X,Y), pp(PP). np(np(DET,NBAR),X,Y,_) --> det(DET,X), nbar(NBAR,X,Y). np(np(PRO),X,Y,Z) --> pro(PRO,X,Y,Z). vp(vp(V),X,Y) --> v(V,X,Y). vp(vp(V,NP),X,Y) --> v(V,X,Y), np(NP,_,_,object). nbar(nbar(JP),X,3) --> jp(JP,X). pp(pp(PREP,N
23 comments
Read more

June 11, 2009
Proponents of Object Oriented Programming feel the paradigm yields code that is better organized, easier to understand and maintain, and reusable. They view procedural programming code as unwieldy spaghetti and embrace OO-centric design patterns as the "right way" to do things. They argue objects are easier to grasp because they model how we view the world. If the popularity of languages like Java and C# is any indication, they may be right. But after almost 20 years of OOP in the mainstream, there's still a large portion of programmers who resist it. If objects truly model the way people think of things in the real world, then why do people have a hard time understanding and working in OOP? I suspect the problem might be the focus on objects instead of actions. If I may quote from Steve Yegge's Execution in the Kingdom of Nouns : Verbs in Javaland are responsible for all the work, but as they are held in contempt by all, no Verb is ever permitted to wander about
9 comments
Read more